(originally posted to the BaseClass newsletter.)

Why Should I Care?

Have you ever wanted to know:

In 5 Minutes or Less:

You may be familiar with how we represent a number in binary.

Each bit represents a power of 2, and by combining them we can produce every whole number:

But what happens when we need to represent something that isn’t an integer, like 2.5?

Let’s split the 8 bits in half.

We can represent fractions now, but we’ve lost a lot of range.

We can’t represent 16.0 in this format, for example. There just aren’t enough bits on the left of the point.

We could just keep adding more bits to store larger numbers, but this format is still quite limited.

This is what floating-point is; a way of storing numbers that allows the point to move to represent a larger range of values.

The standard for float values is called ‘IEEE 754’, which defines both 32 and 64-bit floating-point (or ‘float’) values.

We use these 3 values in a formula, which gives us the number that the float represents: 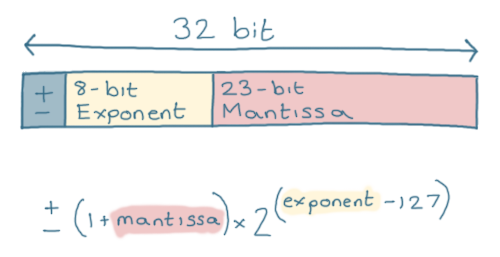 You don’t need to understand this formula, just know that this way of storing numbers means we can represent a much larger range.

By making the ‘exponent’ value larger or smaller we can represent very small fractions or very large numbers.

That’s why it’s called ‘floating-point,’ it doesn’t have a fixed point like our original example. Instead, the point ‘floats’, or moves, depending on the size of the ‘exponent.’

There are some numbers we can’t represent exactly using our standard decimal system.

For example, we can’t represent ⅓ exactly in decimal:

This is also true of some numbers in binary; they cannot be represented exactly.

For example, let’s try to represent 0.1 in binary.

Again, the values after the decimal point represent the fractions:

The fact that our point can ‘move’ means that we can add more precision to this fraction if we like, but the fact remains that we just cannot represent some numbers exactly in binary.

This can lead to some interesting rounding errors.

With this in mind, we usually compare floating-point numbers by checking the difference between them.

For example, instead of checking whether two numbers are equal, we would check that the difference between them is very small.

This is a simplified example, of course. In reality, you would choose a tolerance appropriate to the calculation you are doing.

Check out these links: