Google is working with other browser vendors and industry partners to fix the top five browser compatibility pain points for web developers. The areas of focus are CSS Flexbox, CSS Grid, position: sticky, aspect-ratio, and CSS transforms. Check out How you can contribute and follow along to learn how to get involved.

Compatibility on the web has always been a big challenge for developers. In the last couple of years, Google and other partners, including Mozilla and Microsoft, have set out to learn more about the top pain points for web developers, to drive our work and prioritization to make the situation better. This project is connected to Google’s Developer Satisfaction (DevSAT) work, and it started on a larger scale with the creation of the MDN DNA (Developer Needs Assessment) surveys in 2019 and 2020, and a deep-dive research effort presented in the MDN Browser Compatibility Report 2020. Additional research has been done in various channels, such as the State of CSS and State of JS surveys.

The goal in 2021 is to eliminate browser compatibility problems in five key focus areas so developers can confidently build on them as reliable foundations. This effort is called #Compat2021.

Choosing what to focus on #

While there are browser compatibility issues in basically all of the web platform, the focus of this project is on a small number of the most problematic areas which can be made significantly better, thus removing them as top issues for developers.

The compatibility project uses multiple criteria influencing which areas to prioritize, and some are:

In 2020, Chromium started work addressing the top areas outlined in Improving Chromium’s browser compatibility in 2020. In 2021, we are beginning a dedicated effort to go even further. Google and Microsoft are working together on addressing top issues in Chromium, along with Igalia. Igalia, who are regular contributors to Chromium and WebKit, and maintainers of the official WebKit port for embedded devices, have been very supportive and engaged in these compatibility efforts, and will be helping tackle and track the identified issues.

Here are the areas which are committed to being fixed in 2021.

CSS Flexbox is widely used on the web and there are still some major challenges for developers. For example, both Chromium and WebKit have had issues with auto-height flex containers leading to incorrectly sized images.

CSS Grid is a core building block for modern web layouts, replacing many older techniques and workarounds. As adoption is growing, it needs to be rock solid, so that differences between browsers is never a reason to avoid it. One area that’s lacking is the ability to animate grid layouts, supported in Gecko but not Chromium or WebKit. When supported, effects like this are made possible:

While a newer feature like subgrid is important for developers, it isn’t a part of this specific effort. To follow along, see Subgrid compat on MDN.

Sticky positioning allows content to stick to the edge of the viewport and is commonly used for headers that are always visible at the top of the viewport. While supported in all browsers, there are common use cases where it doesn’t work as intended. For example, sticky table headers aren’t supported in Chromium, and although now supported behind a flag, the results are inconsistent across browsers:

Check out the sticky table headers demo by Rob Flack.

The new aspect-ratio CSS property makes it easy to maintain a consistent width-to-height ratio for elements, removing the need for the well-known padding-top hack:

Because it is such a common use case this is expected to become widely used, and we want to make sure it’s solid in all common scenarios and across browsers.

CSS transforms have been supported in all browsers for many years and are widely used on the web. However, there still remain many areas where they don’t work the same across browsers, notably with animations and 3D transforms. For example, a card flip effect can be very inconsistent across browsers:

There will be regular updates about the progress here on web.dev and you can also follow the progress for each focus area in the Compat 2021 Dashboard. 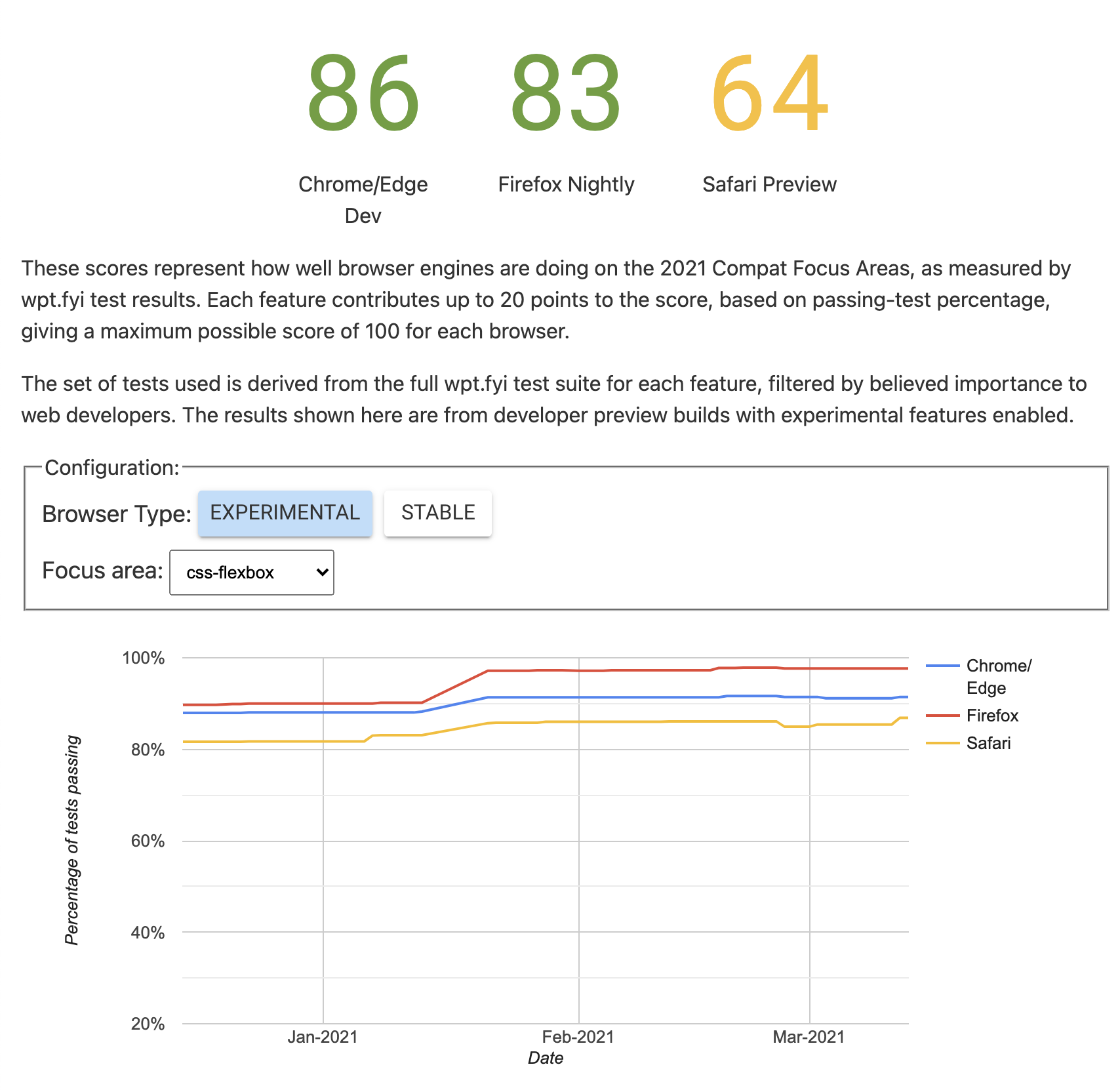 We hope this concerted effort among browser vendors to improve reliability and interoperability will help you go build amazing things on the web!