What Is a Single-page Application (SPA)?

What Is a Single-page Application (SPA)?


Single-page application technology has become the de facto standard for creating modern web applications today due to the numerous benefits related to loading times and user experience. Industry giants of the digital space that have already adopted this approach to web development include Facebook, Gmail, Google Maps, LinkedIn, and Netflix.

What Is a Single-page Application?

A single-page application (SPA) is a JavaScript framework for distributing application functionality over the web. The three most popular SPA tools are:

Prior to the introduction of single-page apps, applications were built and rendered on the server-side and delivered — fully formed — to the client device: as the user navigated through the application, each page was created from scratch and so required to be constantly refreshed, leading to a ‘flickery’ screen. Data-intensive web apps, which pulled data from multiple different sources, could also be slow to load.

With single-page applications, presentation logic is rendered on the client-side and the visual structure of the web app remains consistent for the duration of the session, with newly requested data being refreshed in the background. This provides a much smoother experience for the user.

Here are some of the advantages of single-page apps that make this type of application so popular:

The biggest single advantage of the SPA is speed. Numerous studies from Google and others have shown that slow load times will hurt user satisfaction, causing shoppers to abandon carts and reducing the willingness of visitors to come back to your site. Once the single page app is loaded, the amount of data traveling between the client device and the server is very small, so load times are minimized.

When developing a single page application, the server-side code is re-used and is effectively decoupled from the front-end UI. This means back-end and front-end teams can focus on doing their jobs without worrying about what’s being developed elsewhere.

4. Can Be Distributed As a Progressive Web App

Once created, the SPA can easily be distributed as a progressive web application (PWA) to deliver a very similar experience to a mobile app but with a massively reduced footprint. 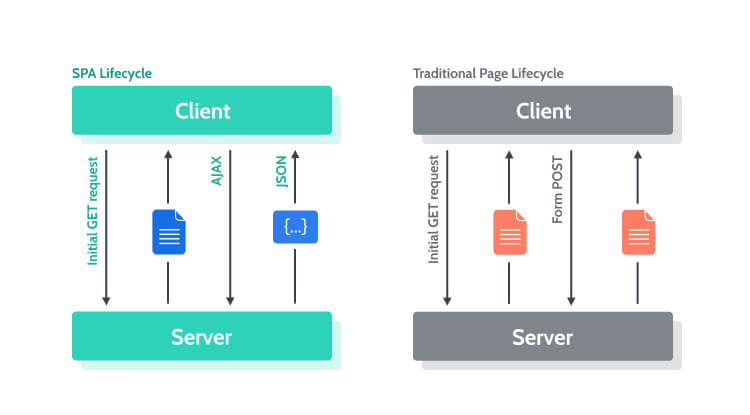 The traditional multi-page app (MPA) approach requires no JavaScript expertise within your development teams (although the coupling of front and back-end means that sites tend to take longer to build). You can scale the content as much as you want to simply by adding another page and, because the content on each page is static, Search Engine Optimization (SEO) is generally straightforward. On the downside, MPAs are much slower in operation as every new page is loaded from scratch. However, if your web content is (largely) read-only, then MPA may provide you with all you need.

As for single-page apps, their primary advantage is their speed, as I’ve already noted. In addition to that, SPAs are much better suited to exposing rich functionality than MPAs and they also cache information so the application can be used offline. The biggest downside of SPAs is that the dynamic nature of their content does make SEO and discoverability more complex. However, as more companies adopt SPAs, crawlers and search engines have been evolving to better deal with this type of app.

That said, it’s not really a case of single-page apps being better than multi-page apps or vice versa. Both approaches have their merits. It’s important to note, though, that as the web crawler and indexing issues traditionally associated with single-page apps are resolved, the advantages of MPAs over SPAs will start to fade, and the latter will indeed become the de facto standard for modern web apps.