Top 3 Most Popular Nodejs Frameworks and When to Use Them

Top 3 Most Popular Nodejs Frameworks and When to Use Them


Javascript is everywhere, and Node.js has played a significant role in the widespread use of JavaScript. Since its launch in 2009, Node.js has become the go-to technology for building server-side javascript applications.

Over the years, many experienced Javascript developers have developed some extraordinary frameworks to get started with Node.js. Express.js, koa.js, and Socket.io being some of the most popular ones. In this blog, these 3 Nodejs frameworks in the discussion. Each has a distinct set of features and aims to add performance and scale to apps.

Express.js– Express for Everyone 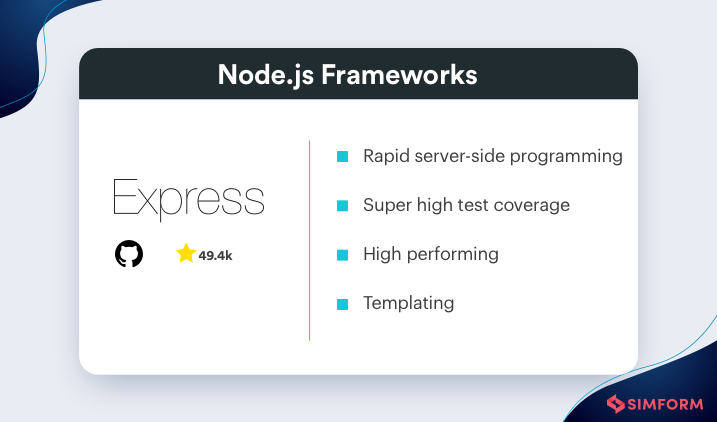 Express.js, aka Express, tops the list of best Node.js frameworks. It has a minimalistic approach and seems to be a classic and straightforward framework for coding architecture. Officially launched in 2010, the de facto standard for Node.js under the MIT license has been called the de facto standard.

Improving communication between client and server provides a thoroughly enjoyable experience to a web or mobile user. Companies like Twitter, Uber, Accenture, and other tech giants like IBM deploy applications built with Express.

Express offers some powerful features that take backend development to the next level.

When to Use Express.js

You can develop web apps faster with the framework since it has almost readily available grounds for API generation. You can use it for any enterprise-grade or browser-based app because of its robust routing, templating, security features, and error handling provisions.

It’s quite suitable for almost any kind of web and mobile application development from small to large scale. For development teams at beginner levels, Express is the best choice since there’s outstanding community support available for this framework.

The following framework is- Koa.js. It’s being hailed as the next generation Node.js framework, so let’s see what it offers for modern-application development. 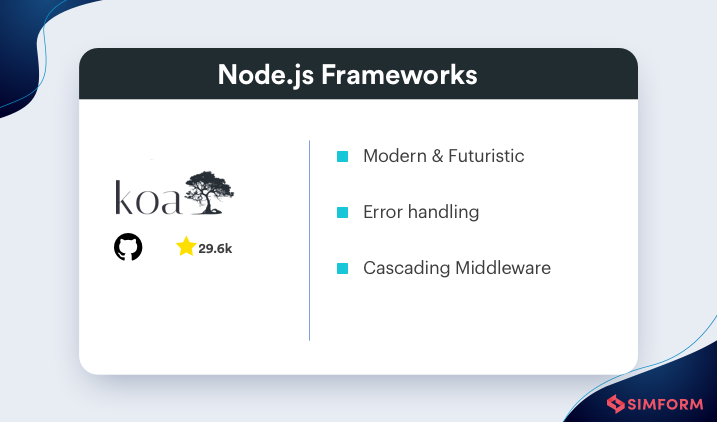 One of the more dominant Node.js frameworks, Koa works wonders creating different web services, aka APIs. Building these APIs becomes super fun and easy with Koa since it can efficiently deal with HTTP middleware with a stack-like method.

Another perk of using Koa is that it’s quite similar to Express. You can still enjoy the flexibility of Express with more freedom and fewer complexities while writing code. It minimizes the scope of errors across the entire stack of the application.

When performance is a critical demand from your web application, Koa is what you need. Especially for a big project, the framework can build extensive apps with large and experienced development teams. Under certain circumstances, Koa has proven to be a faster framework than Express.

However, it may seem to be a difficult choice for beginners because it’s still in the community’s growth stages and is less popular as a result. 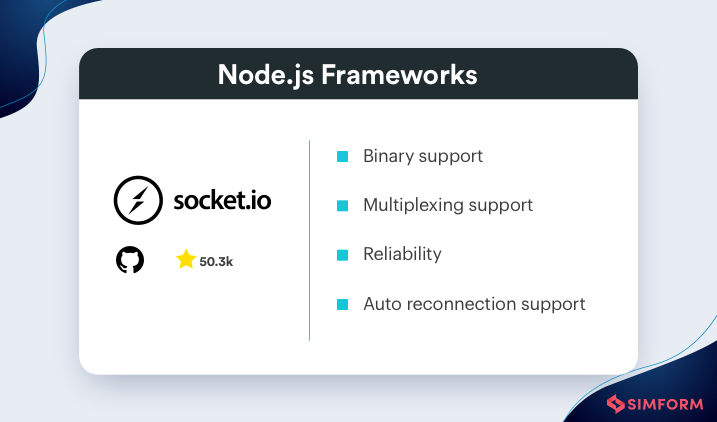 While all these real-time apps are connected and have the essential feature of real-time updating of responses and requests, we need Socket.io to configure the functionality.

Socket.io is a Javascript library used to build real-time apps and establish bidirectional communication between web clients and servers. With this library framework, you can develop applications with requirements for WebSocket development. For example, chat applications like Whatsapp continuously run for live updates and refresh the background process for updates or messages. It also offers real-time analytics in fewer lines of code.

More than a thousand companies, including Bepro, Barogo, and Patreon, use Socket.io.

When to Use Socket.io

Socket.io develops real-time applications like chat room applications, video conferencing apps, multiplayer games, and others, where servers must push the data without being requested from the client-side. For example, live video calling apps like Zoom need to communicate real-time bidirectional data to several participants, and Socket could come in handy with similar apps.

Each of these frameworks come with unique features and an active community continuously working towards its progress. What makes these frameworks even more impressive is that they update their functionalities to keep them in sync with the needs of the modern software development industry and app users’ requirements.

What do you think of these frameworks? And are there more frameworks which are your personal favorites? Let us know in the comment below.