As per the scheduled Drupal 9 release date it was launched on June 3, 2020. With this in mind, the enterprises will need to achieve full functionality later or sooner and maintain the ability to receive Drupal security updates in a bi-annual cycle. In the past, migrating from one version to another was like migrating from another CMS to Drupal, which brings more time and fatigue.

However, upgrading from Drupal 7 or Drupal 8 to Drupal 9 is easy and painless. Let’s dive into more details and understand why the Drupal 9 upgrade would be a better option.

Why Do You Need to Go For Drupal 9 Upgrade?

With the soon-to-be-expiration of Drupal 7 and Drupal 8, managing a website safely and with full functionality will not be a viable option. Here are three reasons you should consider upgrading your site to Drupal 9:

The Drupal Security Team will no longer provide support or security advice by ending the cybersecurity of your website and its users.

Drupal 7 and Drupal 8 publications will be marked as ‘not supported’ on all project pages. These Drupal versions may be marked as insecure in third-party scans that challenge integration with other third-party tools and systems.

Even leading hosting service providers like Aquia and Pantheon will soon withdraw their support from Drupal 7 and leave you without many options. Still, they will take on the responsibility of hosting to maintain your application and server-level configuration.

Drupal 9 has added several innovative features that will be updated biennially to help enterprises stay up to date. Now when you upgrade your system to Drupal 9, the next time you plan to update it to a Drupal latest version, you don’t need to make significant changes. Here are some new features that are updated in Drupal 9.

Drupal 9 is backward compatible; that is, it is consistent with its predecessor, Drupal 8. That being said, unlike the case of D9, D7, and D8, the same software will be able to use modules, configurations, and data built on D8.

Besides, preserving this functionality will not burden Drupal with historical stuff and therefore will not affect system performance. The Drupal community is focused on breaking code, not on data. This way, Drupal will be faster, clutter-free, and yet more advanced.

Drupal 9 has extended this to support for responsive images, in which mobile can display the best-sized pictures and, therefore, consume a small amount of data. In a recent webinar by Dries, he mentioned that the above / updates would witness Drupal 9.1 innovation and pave the way for faster and better performance of websites. The Drupal 9.1 update is scheduled six months after the release of Drupal 9. Meanwhile, the D9 has some features that you can take for an efficient workflow-

Drupal has removed support for depreciation in Drupal 8. This implementation will ensure that the code marked as depreciation will no longer be supported and will be used in the Drupal ecosystem. The purpose behind this is to make Drupal 9 a cleaner version so that whenever the modules in Drupal 8 want to be compatible with Drupal 9, they have to remove the previously removed code. Thus, the result is clear – to make the system more agile and to improve the performance of the website.

Symfony 3 will be replaced with Symfony 4 or 5 after November 2021. Besides, the Drupal Community may offer an upgrade to Twig 2.0. These upgrades will only enhance performance, more developer experience, and security.

Drupal 8 and Drupal 9 both come with an API-first approach. Dries also mentioned in the webinar that the Drupal Community works hard on headless Drupal CMS so that it can enhance the user experience with a powerful front-end of the website like React or Angular with JavaScript framework. Essential features of Drupal Headless CMS are,

At this stage, you should use Drupal 7 or Drupal 8. Both Drupal versions will still provide support until 2021, so you have enough breathing room for the Drupal 9 upgrade before midnight. However, if you are using Drupal 7, then you may want to update to 8 later. As we said, the migration process can take a while, so it will take a lot of time to empty before Drupal version 9 hits. 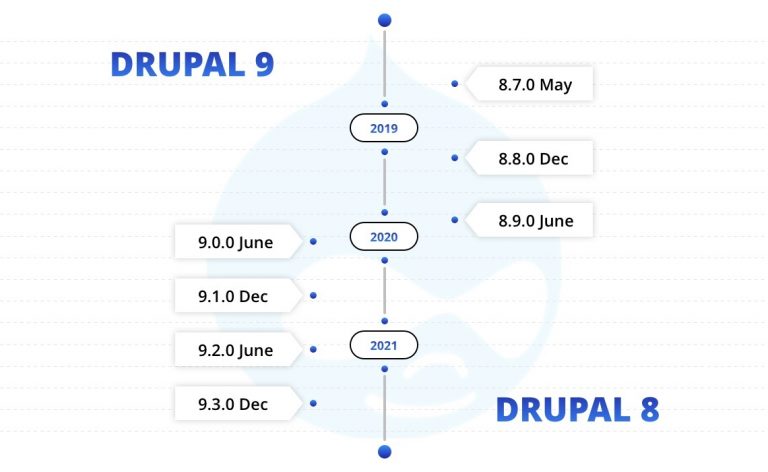 On the other hand, if you’re already using Drupal 8, the upgrade should be pretty straightforward. To make sure it’s running smoothly, you’ll want to close some box boxes:

Finally, there are many tools you can use to test your Drupal website for deleted code. We are fans of Drupal checker (which you can run from the command line). Find errors with those categories, unselected codes, and more. At this point, you will be ready to hop on the Drupal 9 train as soon as you leave the station.

Drupal 9 release signals a change in the way the central team performs. The goal is for most Drupal users to stay as seamless as possible for built-in backed up compatibility for upgrades. If you are already using Drupal 8, the update should run smoothly as long as your modules are up to date and you are not using the upgrade code.