A Brief Walk Through the .NET Ecosystem

A Brief Walk Through the .NET Ecosystem


.NET is an open-source developer platform created by Microsoft for building many different types of applications, such as web, mobile, desktop, games, etc. It consists of different tools, programming languages, and libraries. Let’s start with a brief history of the .NET.

The History Behind .NET

During 1990s, Microsoft started to work on something called the .NET Strategy. The key point of this strategy was to encompass all Microsoft products and add .NET to existing product names. In the 2000s, .NET framework was known as the Next Generation Windows Services (NGWS). The first beta versions of the .NET framework were released in the late 2000s, and the first version of .NET 1.0 was released on February 13, 2002. Since then, many versions were released with new features. Some of the most important were:

Currently, the .NET Ecosystem consists of different components in the development platform. It encompasses different runtimes, such as:

All of the above runtimes implement the .NET Standard Library, which is a specification of .NET APIs that have implementations for each runtime. So, code that is created for one runtime can be executed with other runtimes.

All the runtimes use tools and infrastructure to compile and run code. This includes languages (C#, Visual Basic), compilers (Roslyn), garbage collection, as well as build tools like MS Build, or (Core) CLR. 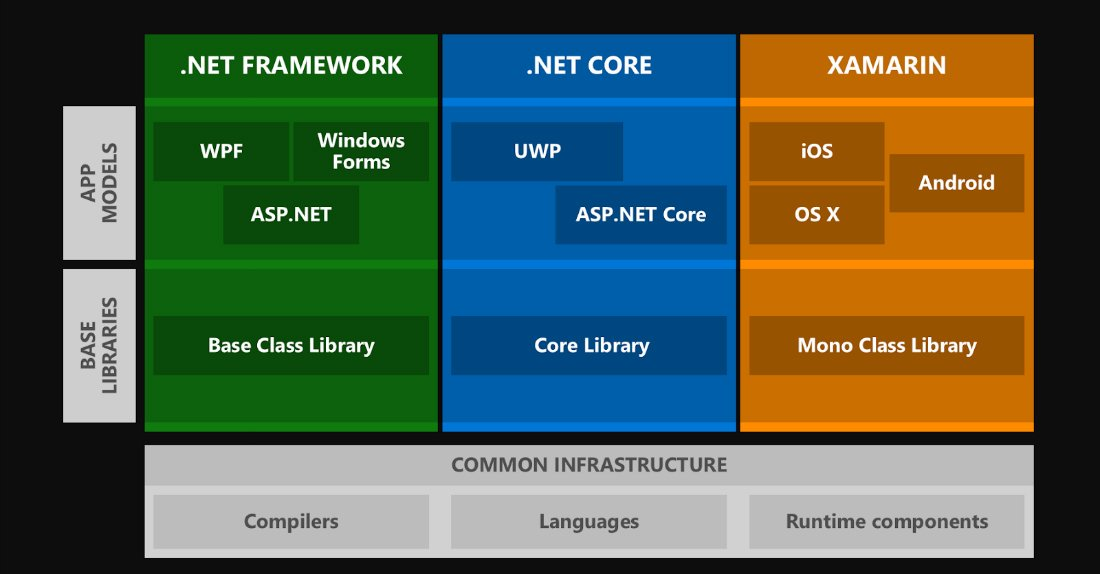 In this section we will look at main .NET runtimes:

Code that is managed by CLR is called managed code. Code is compiled into Common Intermediate Language (CIL) and stored in assemblies (with .exe or .dll extension). When the application runs, CLR takes assembly and uses just-in-time compiler (JIT) to transpile machine code into code that can run on a specific computer architecture. 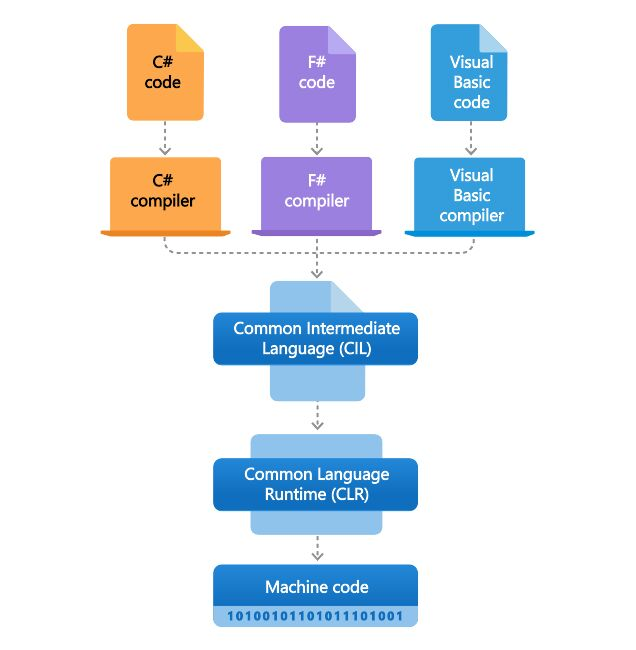 If you want to run applications that are built by using .NET Framework, you need to install it first, although Windows already comes with some versions installed. Each version has the CLR and library. It is possible to install multiple versions, side-by-side (only major versions). Minor versions will override existing versions, as they don’t contain braking changes. For example, for .NET 4.2.3: the major version is 4 (new CLR), 2 minor version means (new library, which introduces new features), and 3 revision (bug fixes).

.NET Framework is installed usually at C:WindowsMicrosoft.NETFramework (or Framework64). Inside, you will find folders with all major versions installed.

.NET Core is one of the runtimes in the .NET Ecosystem. It was released in 2016 and open-sourced (https://github.com/dotnet/core). It does not represent a new version of the .NET Framework and will not replace it. It’s completely independent built to allow cross-platform capabilities to application development. .NET Core consists of the App Host (dotnet.exe) that runs CLR and Library. It has Common language runtimes (CoreCLR) and the .NET Core Class Library.

In addition, its possible to create self-contained version, which don’t need installed .NET core on the host machine, as it packs app host in the resulting .exe file. The disadvantage is that the the deployment will be larger. It is run via:

Mono is a clone of .NET framework runtime. Mono was created in 2001, but the specific part for Xamarin was released in 2011. and its open source: https://github.com/mono/mono and www.mono-project.com. Microsoft acquired Xamarin in 2016., making it a fully open-source branch of the .NET platform. It consists of Mono runtime and Xamarin Class Library and can run application workloads like IOS, OS X and Android.

Mono is similar to .NET Core and includes Garbage collection, JIT, AOT and full support for C# (not VB.NET and F#). The Mono AOT compiler enables .NET code to be built into a single native code executable that can run on a machine, much like C++ code. Mono for Xamarin has a class library that support creating applications (for IO, collections, etc). But its a subset of .NET framework, there are not all components supported.

It can run following workloads: Apple IOS applications, MAC OS X applications (desktop), Android applications, etc. and allows you to share code between these platforms and they run as native applications on devices that run on Mono. Each application is bundled with the Mono runtime and a class library. There is no need to install Mono on a device.

Over time, it branched out into wider areas, such as game development, where Unity and Mono for Xamarin have long worked together to provide C# support in Unity.

These are specific frameworks with a specific purpose. Both runtime were attempts to provide cut-down runtimes that would run on more constrained devices, such as PDAs, mobile phones factory controllers, etc. For example, .NET Micro Framework was build for resource-constrained devices with at least 256KB of flash and 64KB of RAM memory.

Silverlight was a popular cross-platform, .NET technology that enabled building rich media experiences for browsers. It was released on 2007 and had multiple capabilities, such as playing videos, download medias, creating rich UI and animations, etc. In 2015. Microsoft decided to stop supporting Silverlight in October 2021.

Besides Microsoft official runtimes, there are .NET runtimes made by community, such as DotGNU Portable.NET, DotNetAnywhere, CosmosOS and CrossNet. All of them have a slighty different approach to build such a framework.

The differences between .NET Standard and Portable Class Libraries (which is library that can be used on different platforms).

For the .NET Framework tooling, use MSBuild, which is invoked when code is built in Visual Studio, or it can be called from a command line. MSBuild knows how to build or who should compile them. If the code is C#/VB.NET, it will call the .NET Compiler Platform (Roslyn). The result of compilation is a binary file (.EXE or .DLL) with intermediate language (IL). It can be interpreted by CLR. CLR contains a JIT-compiler, which compiles to native code, which OS understands. CLR has tools like Garbage Collector to clean memory when not needed.

MSBuild is also used in .NET Core tooling, as well as .NET Compiler Platform (Roslyn). It produces binaries (.EXE, .DLL) with intermediate language (IL), which is used by the Core Common Language Runtime (CoreCLR). CoreCLR is different from .NET Framwork CLR, as it can run on multiple frameworks. It has JIT-Compiler that can compile IL into native code for Windows, MacOS, and Linux.

There is another path to compile apps. When UWP is compiled, it’s compiled with AOT-Compiled (.NET Native), which produced Native code from IL and produced code as deployable package instead of compiling at runtime, which has performance benefit.

MSBuild is used again to run build processes but only for files in C#. If there are C# code for Android, its compiled via Xamarin Compiler and compiled for Android platform (IL). Then Mono Runtime, which as JIT-Compiler, takes IL and produces Native code specific for that Android device on demand at runtime. It has also runtime services such as Garbage Collector.

If we have C# code for IOS, its compiled via Xamarin Compiler, who pre-compile and produce package native for IOS (uses ARM Assembly language).

As a side note on Xamarin, it also has different competitors, such as Uno Platform and Avalonia UI. There is also a new kid in the block from Microsoft, called Blazor. All of these tools mainly uses WebAssembly (WASM) in combination with C# and XAML or JavaScript to allow developers to deploy apps in the browser, but also on different devices.

Visual Studio is a Microsoft IDE used for building, debugging, and publishing applications across all platforms, including Android and iOS. Visual Studio is integrated with .NET and provides the features of language-specific environment.

Visual Studio can be run on Windows and Mac. There is a free community version to be used.

There are different kinds of libraries that can be used in the .NET ecosystem, most of which can be found as NuGet packages. NuGet is a package manager build for .NET that contains more than 90,000 packages.

Different kinds of .NET applications can be written in C#, F# or Visual Basic.

C# is a simple, modern, object-oriented programming language, whose roots are in the C family of languages. The current version is 8.0 and is supported on .NET Core 3.x and .NET Standard 2.1. More on C# here.

The question is when to use each of the runtimes. This is a suggestion:

If you use .NET Core you can use framework-dependent applications or self-contained applications. Use Framework-dependent if no target os is needed, you need small deployment (installed on machine). But for self-contained app there is control over version and .NET Core doesn’t need to be installed, but the deployment is larger and need to select target OS.

If we choose between ASP.NET or ASP.NET Core, ASP.NET is much older technology that runs only on Windows, but it has large set of capatibilites and features. ASP.NET Core can be run cross-platform and its designed for high-performance and can run self-contained. It has less capatibilites and 3rd party libraries than ASP.NET. No ASP.NET Forms.

Regarding the usage of sharing code, we need to check first do we need it. If yes, we should use .NET Standard library. If no, than we share code between applications in the same runtime, then we can use library with that specific runtime. This enabled runtime specific features not available in .NET Standard.

Look to the Future

At the Microsoft Build 2019. conference, it is announced that .NET Core and .NET Framework will be unified in .NET 5. There will be only one .NET to target different platforms, such as: Windows, Linux, macOS, iOS, Android, etc. It will consists of new .NET APIs, runtime capatibilities and language features. One of the main topics for .NET 5 will be performance improvements over previous versions of .NET, as well as improvements to RyuJIT code quality, garbage collection, and JSON serialization. Release plan for .NET 5 is that it will ship in November 2020. 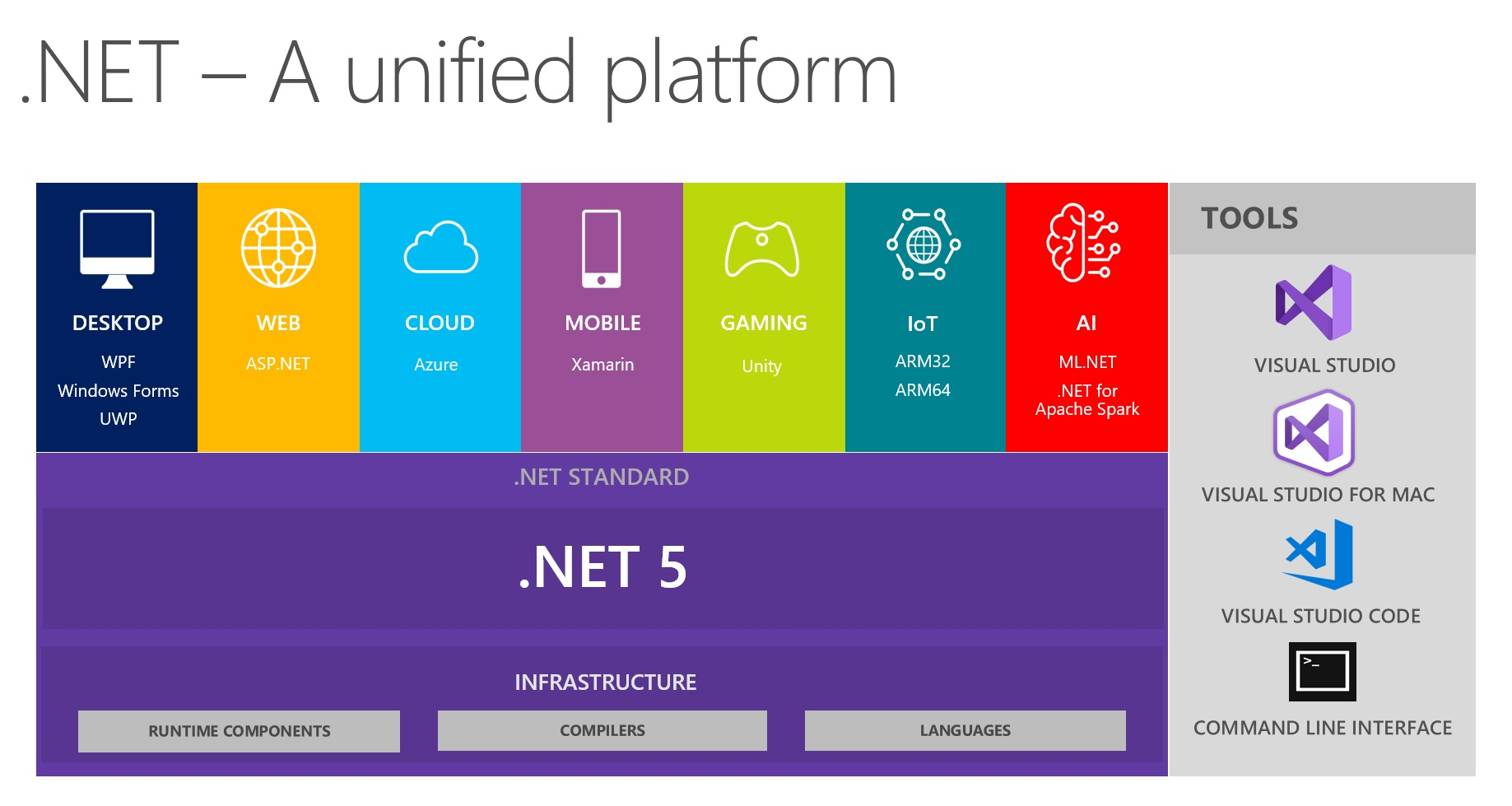 In addition, this year its announced that there will be a new first-class UI framework for creating cross-platform applications, called .NET MAUI. It will be evolution of Xamarin.Forms and will simplify developer workflow and a project structure into a single project to target multiple platforms. Geberal availability of the .NE MAUI will be with .NET 6 in November of 2021.

In 2018. Microsoft also introduced the ML.NET framework for C# and F# languages. So, looking at the latest trends, including Azure as one of the main Cloud platforms, future for the Microsoft-developer world is looking great. With open source and cross-platform as key priorities seems like a right direction in the years to follow.

.NET Guide – the general documentation by Microsoft for newbies;

.NET Core Guide – for those considering transitioning to the Core version;

NuGet – the place to find all .NET packages.