How to Add Responsive Design to React Native Apps

How to Add Responsive Design to React Native Apps

React Native developers make their apps work on one-dimensional devices as a default. As a result, the app looks distorted on devices with different dimensions because different devices have different pixel ratios. React Native style properties accept either Density-Independent Pixels (DP) or percentage.

A density-independent pixel is a unit of length that enables mobile apps to scale across different screen sizes. DPs are not the classic screen pixels. Rather, DPs are mathematically calculated through the following equation: DP=PX/ScaleFactor.

PX is the number of classic screen pixels, and the scaling factor indicates how much the pixels should be enlarged.

React Native developers can scale DP values to screens of different sizes only if they have the same resolution. The problem is that there are hundreds of different devices and most of them have screens with different resolutions.

The following tips will help you develop responsive React Native apps on a massive range of devices.

Flexbox is a method for laying out one-dimensional items in rows or columns. Flexbox enables developers to keep layout proportions on different screen sizes. Flexbox properties use single numbers to divide the screen space between elements. For example, a screen that shows boxes of different colors, as shown in the image below. 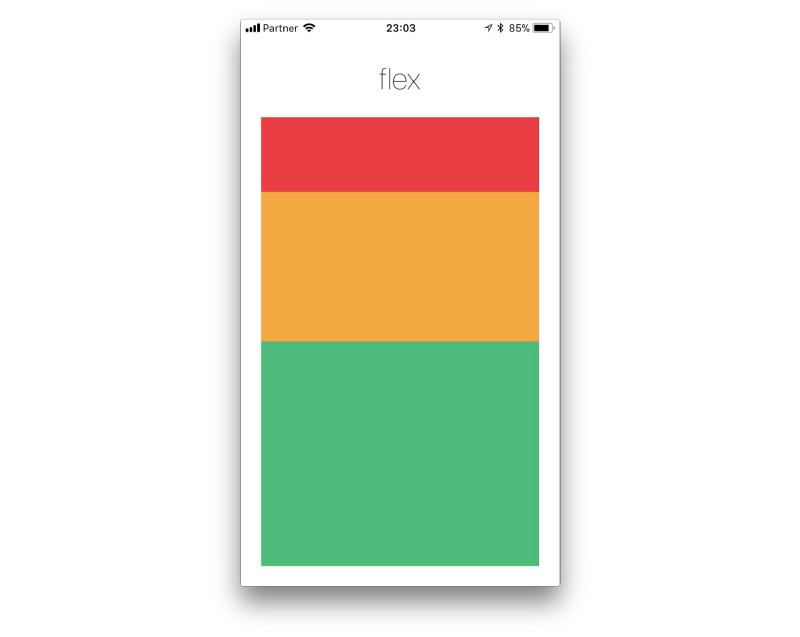 Aspect ratio describes the relationship between the width and the height of an image. Aspect ratio is usually expressed as two numbers separated by a colon, like 16:9. Aspect ratio is a non-standard property available only in React Native, and not in CSS. The aspect ratio property controls the size of undefined element dimensions.

For example, you can use the aspectRatio property to adjust images to screen size when your images extend beyond the screen dimensions. You do not need to know the actual width and height of the image, just set the aspect ratio to 1:1. Your images will take all available screen width, without extending beyond the dimensions.

React Native does not provide properties that can identify the device type or screen size when you work with different layouts. The solution is to use the Dimensions API. The syntax for obtaining the dimensions of a screen is:

After obtaining the size of the screen, you can set breakpoints for layout changes. You can also define different styles to components or hide some parts of the screen.

The platform module in React Native detects if the app is running on Android or iOS. Developers can use this module to implement platform-specific code. For example, the code below will show the text “My device is Apple” when the app runs on iOS.

The platform module is also useful when you want to define the size of an image for specific devices. For example, the code below defines the height of an image for iOS devices.

Many apps can work in landscape and portrait mode. Sometimes, the layout can change drastically when you flip the device. Therefore, you have to ensure that the layout does not break when changing orientation.

This article reviewed responsive layouts challenges in React Native apps and provided solutions for making your responsive layouts much easier. Responsiveness solutions include techniques like Flexbox, dimensions, and aspect ratio properties. In addition, you can detect the device platform and screen orientation to adjust your app to different screen sizes.