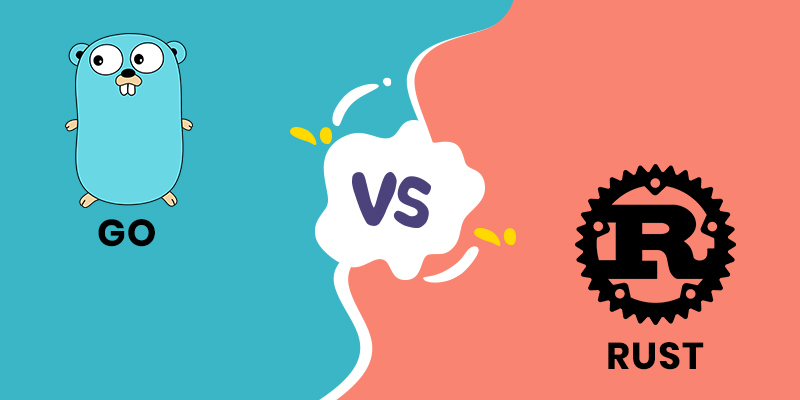 To thrive in a competitive world, choosing the right programming language is important. It is important for the businesses as well as developers to provide a good experience to its users.

It was launched back in 2007 by Google to conceptualize to bring more productivity. Go (also known as Golang) is popular for inbuilt concurrency and garbage collection. Go is designed in a way that it can manage the rigorous dependency and robustness across the various boundaries of the components.

So, this was all a glimpse of the two top programming languages. Now, let us go through the important comparison points to choose the best one from the two.

Performance and Working – Rust vs Go

The performance is one of the factors that can give you an idea for the comparison. The run speed of both languages Rust and Go is almost similar to C++ and C respectively. When it comes to a keen comparison, the development speed of Go is more than that of Rust. In several steps, the performance of Go falls in comparison to Rust.

Modern-day apps should be able to run independently without any risk for data corruption. This risk of data corruption can be controlled with the help of sharing state between the tasks. Go’s syntax comes with inbuilt concurrency, but the same is not the case with Rust. Therefore, in terms of concurrency, Go wins the race.

Sometimes, the development speed becomes more important than that of the program speed. The simplicity and directness that comes with Go make it a faster language than many others. On the other hand, when we talk about Rust, it has more language features which makes it longer for the process for the development and even compilation. So, here we can say that, in terms of development and compilation speed, Go wins the race.

Through zero-cost abstraction, Rust uses the compile strategy for memory management. If there are any security issues in the Rust program, it will not be able to perform the compilation stage. Just like Rust, Go is also memory safe. But, for Go, this is handled automatically during the runtime, which sometimes causes issues. So, in terms of memory management, Rust is more reliable in comparison to Go.

These were a few main point comparisons between the Golang and Rust. In web development, whether it is Rust or Go, both can come up with extraordinary web designs. As per the views of developers. Go is a bit more beneficial than that of Rust.

Who Won The Battle – Rust vs Go?

We might just keep on discussing on the sides and it will never end. Everything has two sides and the same is with these programming languages too. It highly depends on your needs for which one to go for. Both languages have their own pros and cons. But still, to choose one of the two is a tricky choice. To help you in making a decision, here are a few points that can decide on which language to go for.

When to Choose Rust:

When to Choose Go: