In 2019 we spent a great deal of time visiting developers that use Bitrise, traveling around the globe with cross-functional teams, and continued talking to a lot of companies developing mobile apps. We also regularly analyzed a ton of behavioral data to understand how we could improve Bitrise to give the best experience for mobile developers. We’ve drawn our conclusions and thought it would be interesting to break them down into numbers and share the big picture with you.

Some questions we asked:

This and all results presented below were compiled from the data taken from all the active apps of last year on Bitrise. Our users ran almost the same number of builds in 2018 as they did in the last quarter of 2019, so we had plenty of apps, builds and customers to draw relevant conclusions on the state of app development in 2019.

You may also enjoy How to Adopt Mobile DevOps Practices: Mindset and Technologies 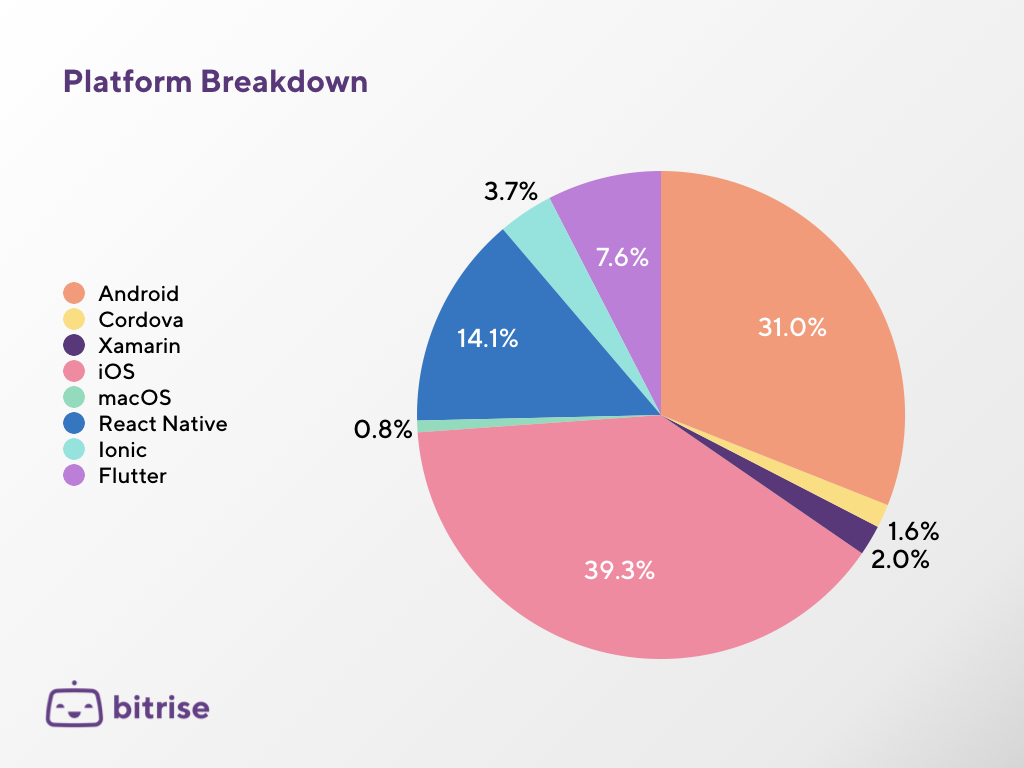 Based on the platform distribution above, there seems to be a continuous downward trend in the percentage of native apps, which, at the same time, also means…

The Rise of Cross-Platform

“In 2019, React Native was still the most popular way to develop cross-platform apps, increasing their share further to 14.1%.”

By the end of 2019, 7.6% of active apps on Bitrise were being built in Flutter. If Flutter continues this growth trajectory over 2020, by Q4 of this year, Flutter projects will outnumber React Native ones on Bitrise.

“If Flutter continues this growth trajectory over 2020, by Q4 of this year, Flutter projects will outnumber React Native ones on Bitrise.“

In 2019, we also saw some very notable apps make the transition to Flutter, including the Tonal companion app, as the Tonal team explained in a recent video.

MacOS saw a very slight decrease in percentage keeping roughly the same amount of active repos, so the demand seems to be steady.

In 2017, Ionic and Cordova both hovered around 1% share of active apps on the platform. Just a year later, both counted almost 3x as many apps on Bitrise, only to further grow to close to 3.7% of total apps being built in Ionic over 2019, versus 1.3% of apps built using Cordova.

In two years, Ionic usage increased steadily: they almost 6x-ed the number of active apps on Bitrise, so that now they are almost twice as big as Xamarin.

Bitrise is dedicated to providing the latest, the safest, the more feature-rich versions of developer tools, so our infra-engineers work hard to provide our users with the newest Xcode versions in 48 hours after release.

Our users seem to appreciate this approach and adopt the new Xcode versions quickly. This chart shows trends in the adoption of Xcode versions released in 2019. 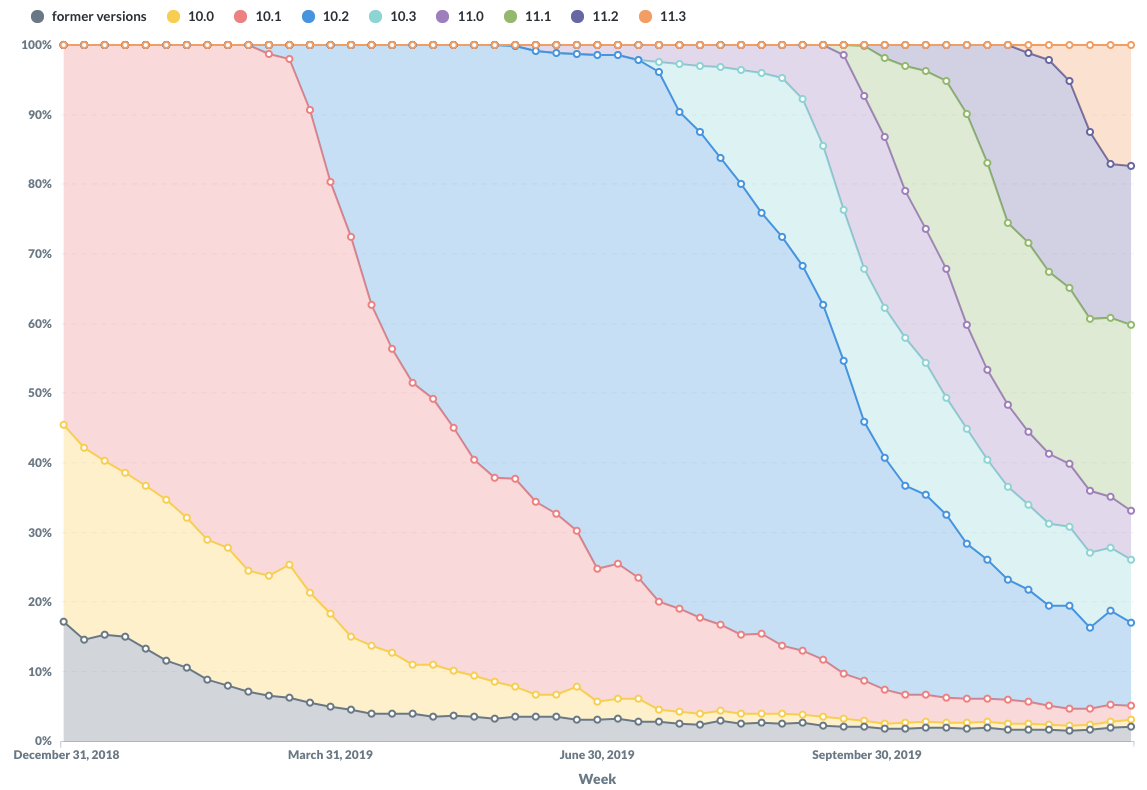 Where the rate of adoption for both Xcode 11 and Xcode 10 was very similar in the initial weeks, soon a change appeared. From week 3-4 on, the rate of adoption of Xcode 11 slowed down considerably compared to 10, indicating that developers opted to continue building on the previous Xcode version. Even though it’s speculation from our side, it seems like some issues with the initial Xcode 11 versions made developers hesitant to switch their build environments over.

Git Hosting in the Cloud 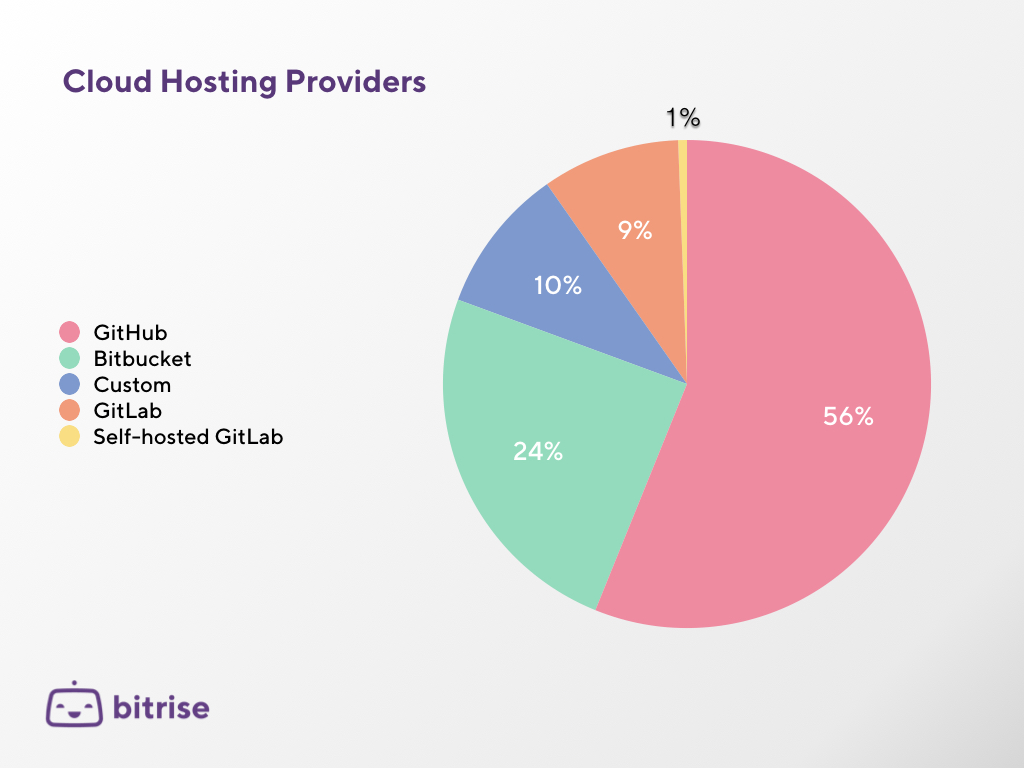 Apps and Their Owners

An average company has 6.47 apps on Bitrise, which almost is the double of last year’s 3.35. Most of these two apps naturally are iOS and Android.

There are currently around 280 steps and integrations in the Bitrise ecosystem. Each of these steps are responsible for a small task, that can be inserted in the build workflow. These can range from running tests, archiving the app, deploying, releasing or notifying team members, among others.

The Most Used Ones

Our Script step ran the most times in 2019, about as many times in the last quarter of 2019 as in 2018. This step is used when someone needs to run a custom command or install/update a tool that is not (yet) available on our virtual machines. (This is also the step that fails the most times, so we suggest to use the official steps if possible.)

Otherwise, developers deployed to Bitrise a lot, (this is done to help deployment to either testers or the app stores.) Our users also tend to take advantage of the Caching solutions Bitrise provides.

Our users love getting automated messages to their Slack channels about their builds: Slack is by far the most popular third-party integration with close to 1.6 million runs in Q4 of 2019, being the 5th most used step of all.

“Slack is by far the most popular third-party integration with close to 1.6 million runs in Q4 of 2019”

The second most used integration is Codecov and Google Play Deploy comes third.

We’re very grateful to the community using Bitrise and most of all to those who contribute to our service. Our users can contribute to Bitrise by writing new steps or upgrading previous ones as all Bitrise steps are open source. The following steps were all written by the members of our community, thank you for all of them!

Most used steps per category 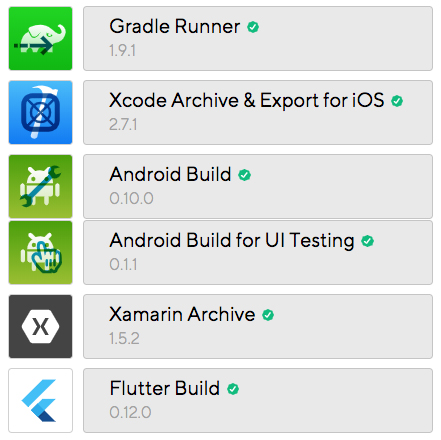 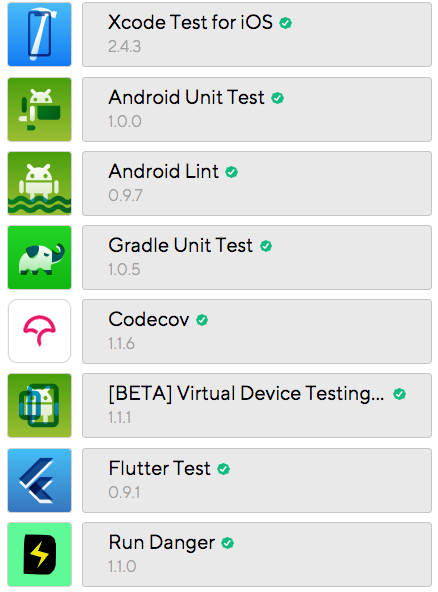 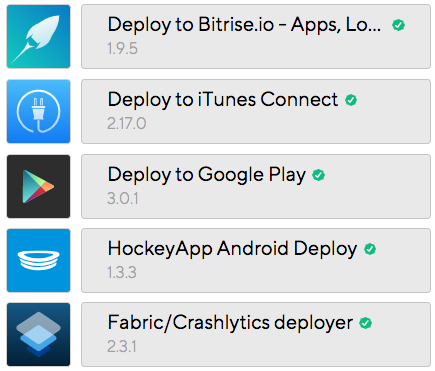 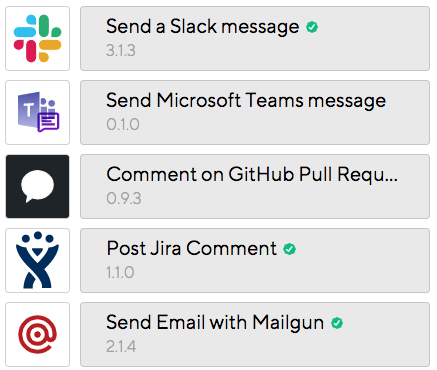 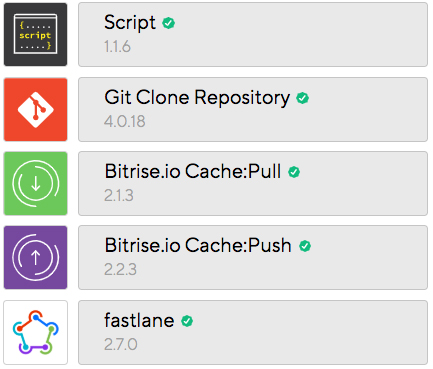 The most frequently built open-source apps on Bitrise are:

We hope these insights were as interesting for you as for us. We love feedback, so Tweet us or comment on our social pages if you have any suggestions, or if we missed anything you might be interested in! We’re proud to help so many great people saving countless hours and ensuring code quality, making sure that you have more time for your ideas and for your code.