As a continuation to my first article, I prepared an implementation of a simple project to show a workable solution.

Before going into detail, I’d like to note that I decided to change the name to Scale instead of Pluggable, as it better highlights the potential of this architecture. The idea is not only to create plugins for an application but actually to drive the development of frontend itself from multiple sources. And the core feature of this itself has to be to split the application into pieces and not create monolith.

The only mechanism that must be in the heart of the system is the line of communication between components, the logic that loads necessary scripts dynamically, and the process of gluing it together with defined rules. There are of course many other aspects that you must take into account like:

Before diving into all of these challenges, in this article, I’ll introduce you to the first implementation of a simple application. Currently, the code for this article is in master. Once I polish it and start working on a more advanced part of it, I’ll move it to branch part-1.

To set up the project locally, you need to have the latest version of Node.js and yarn and gulp globally installed.

Once that’s done, running gulp is enough to set up the entire infrastructure of the project. To make it simple for setting it up and demonstrating from the single place, I placed three modules into one GitHub repository. Though in a real-life scenario, they would be broken up into three separate repositories.


The example I created is for a User Management System, where it is possible to:

“Home” and “User” pages come together with the main application and two others are loaded during system boot-up.

First, we need to configure our backend to read metadata about our core modules and provide the API to load. In this project, we created folder  “modules”  for that. Here, the compiled modules thta are ready for loading are distributed.

The only file created manually is modules-metadata.json. Again, this is done for simplicity. In a real-world scenario, it will be inside of each module, like  modules/admin/metadata.json with snippet 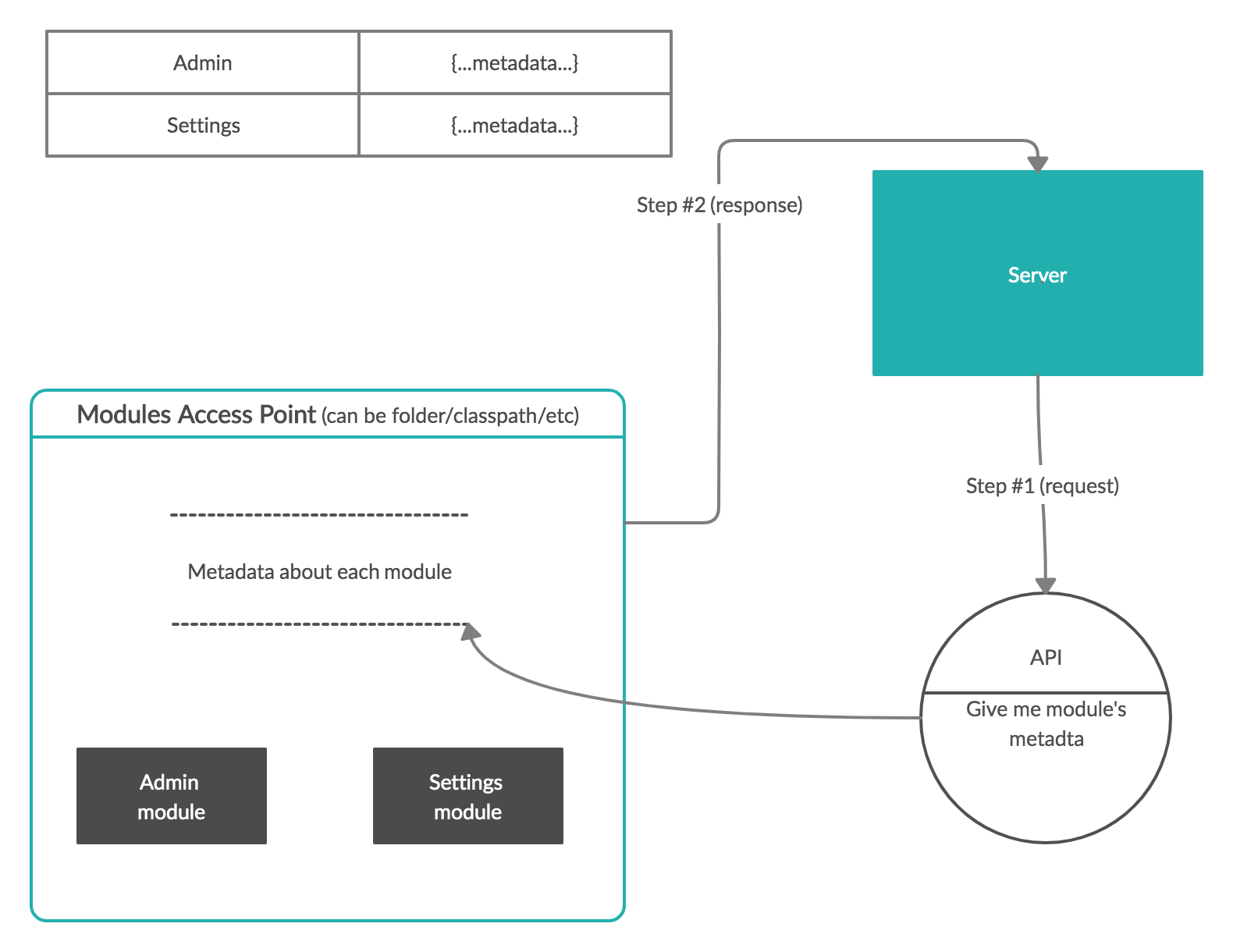 On the frontend, we need to be aware that this file has to be there and request it in api-resource.js.

That call is done from redux-saga, so once data is received, it’s going to be saved in the redux store.

The main application component listens to changes, and when it finds changes in modules, it reacts to them (app.js).

There are two places that are adapted to module changes:

This part adds more navigational components, on which user can click and go there.

This component actually loads the plugin through an API call, attaches it to the HTML page, pulls all sources from that bundle, and connects it to the appropriate parts of the core module. CustomRoutes uses the LoadModule component to perform these actions.

First, we load the script and wait until it is mounted to the page

Then, we get code out of a mounted bundle and incorporating it into a core module

For making it possible to register reducers from different parts of an application a bit of wrapper is created, as you noticed that ReducerRegister:

And when the store is created, you need to create a reducer:

As new reducers come, they are replaced in the store. And the same thing happens here with sharing the Redux store via a window with custom modules. Why use a window? Because that’s a way how is it possible to make a shared objects between different modules compiled individually by webpack.

Let’s have a look at this configuration, which is required to be done in custom module webpack.config.plugin.common.js:

And also externals, to not duplicate third-party libraries:

That scrapes the bundle of React and react-dom from a custom plugin. React doesn’t complain about the two versions of itself in the application (and crashes with react-redux in that case) and makes plugin really slight in comparison with a fully-packed version provided in case of iframe usage. The list of these externals will grow with the number of libraries you will use.

On the side of core module, you need to register such modules globally globals.js.

If in some cases plugin can’t be loaded successfully, to not crash the whole application, we have to isolate it, catch exception and show to the user information about it. For that, the CatchError component is created.

This is, in essence, all of the major parts of the application described above. The rest of the code is to make the application more or less appealing with bare minimum functionality. I encourage you to download the working scenario; setup is super easy. Play around with it! Add some goal, to enhance it with some small feature and feel how is the development going for you. For example, take that you are a developer who is asked to add “history” module with own tab and show all performed actions (adding/removing users).

With the current given implementation what is the bare minimum you will modify in core module and what will you add to a history-module? How are you going to communicate in an efficient way?

How core plugin has to be rewritten so that new history or any other potential functionality won’t require changes in the core module? As this is an ultimate goal of this architecture.

I’m curious and excited to see your forks/PRs/smart and genius ideas regarding that. Looking forward for feedbacks and comments as well!