Though Netflix doesn’t support live streaming, there are other platforms like YouTube and Facebook that support this feature. This article covers a brief overview of a Live Streaming Service, the various protocols that support streaming, and a high-level system design of the service itself.

Typically, live streaming involves a combination of sophisticated hardware and software components, which would be impossible to cover in this, single article. But, due consideration is given to them in the high-level design so that we can get a feel for the different components/services that are required to build a streaming service.

Before getting onto the components that build up the live streaming design, we need to know some widely used protocol abbreviations that are used in streaming. For more details, a Wikipedia link is tagged in case you want to understand any specific protocol more in-depth.

You may also like:
Real-Time Analytics in the World of Virtual Reality and Live Streaming. 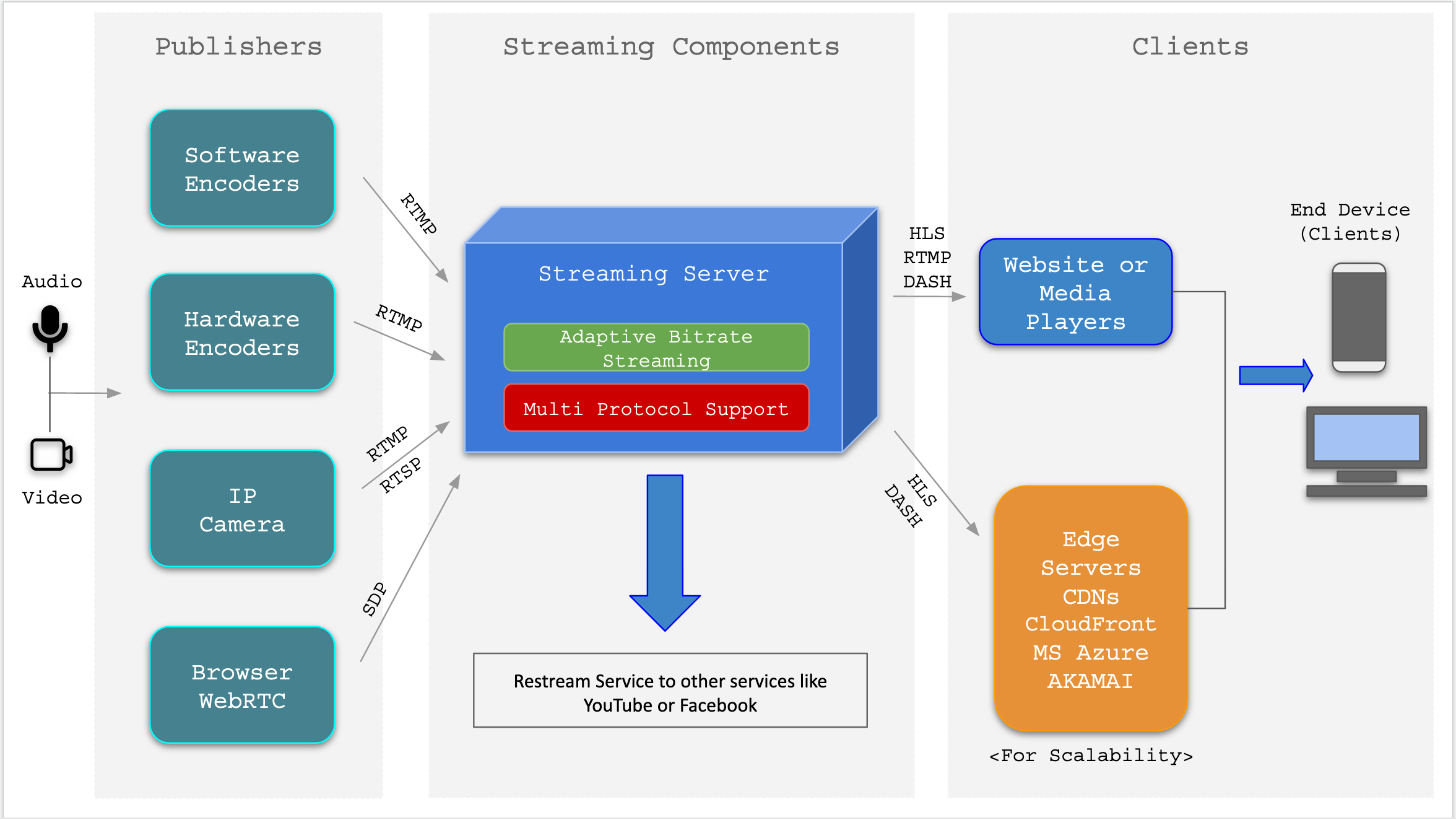 Publishers form the very first input that generate raw audio and video of the streaming service. Conventionally the main audio, video, and graphics are generated using mics and video-cameras. This data is mainly consumed by encoders (software/hardware-based), which forms the heart of the Publisher.

The primary role of an encoder is to consume the audio, video, and graphics that have to be streamed and convert them into data that can be sent across a network. Hardware Encoders are physical equipment, and they only encode and stream data with high reliability. These encoders can be attached to multiple audio and video devices. An example of an open source software encoder is the OBS — Open Broadcaster Software.

The protocols used for sending encoded data by the publishers are RTMP, RTSP, and SDP (may not be limited to these in reality).

A Streaming Server receives encoded data from the software/hardware encoders. It creates multiple formats of the stream and can save it locally or re-stream to another service. It also supports multiple protocols.

The main feature of the Streaming Server is Adapter Bit-rate Streaming. It is a method of video streaming over HTTP where the source content is encoded at multiple bit rates. Each of the different bit rate streams is segmented into smaller parts.

The segment size can vary between 2 and 10 seconds. First, the client downloads a manifest file that describes the available stream segments and their respective bit rates. During stream start-up, the client usually requests the segments from the lowest bit rate stream. If the client finds that the network throughput is greater than the bit rate of the downloaded segment, then it will request a higher bit rate segment.

The Streaming Server can re-stream data to other streaming services like Facebook, YouTube, etc. Typically, when the traffic grows, the server cannot handle all the requests, and it might end up being very slow, resulting in buffering issues at the client end.

In order to mitigate this and to make it highly scalable, the server can re-stream the content to edge servers or CDN providers, like AWS CloudFront, Akamai, etc. The server can also strategically push content to CDN providers that are geographically located where a majority of the usage is. The protocol supported in this case would be HLS/DASH only as they are based on HTTP and no other protocols are supported by edge servers or CDNs.

The Clients or Viewers are usually media players in the service provider or any device-specific applications (e.g YouTube/Facebook apps for Android or iOS). To reach every client device, the most popular protocol that is used is HLS. HLS is universally supported and can play on all modern devices. There are some devices that still support RTMP (with embedded flash players), but this is almost reaching (or already reached) an end-of-life.

Each and every component mentioned in the sections Publisher and Streaming Components of the design are very large topics in itself and doesn’t cover under the scope of this article. It is advisable to research the components in detail based on your needs. This article is a primer and gives an overview of live streaming, components, and various protocols used along with Wikipedia references and a high-level system design. I hope you found this helpful!